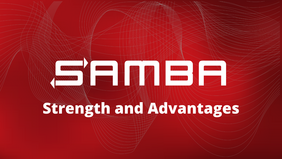 Samba is an open source SMB implementation and the reference for other projects. It is developed by an international community that is committed to highest technology standards and free software principles. Samba is available since 1992 and is used by many storage OEMs, often since decades.

A variety of strengths and advantages make Samba what it is: a highly reliable SMB stack that continues to evolve. We from SerNet, one of the main support and development companies of Samba, would like to present some of them in an two-part article. Part one takes a look at some of the organizational, technical and conceptual issues that are often discussed. Part two will present technical milestones and upcoming improvements.

SAMBA is Open Source
The open source Samba code is on the web and cannot be taken down. Everybody is free to use, run and modify the software from smallest to biggest environments in both closed and public settings.

Samba is the best option for security and compliance, because you can test and verify it yourself down to the core. And due it's long history the Samba code has been extensively tested and reviewed by the large community, it's users and companies shipping Samba in their products.

Most companies, including startups and blue chips, can easily work with the GPLv3 license on the basis of sane legal advice. We recommend watching the numerous video and audio contributions from companies using SAMBA which have been presented at SerNet's annual SAMBA conference sambaXP since 2002 (see the archive or our YouTube channel).

“SAMBA, Inc.” can‘t be sold - because there is none
Vendors naturally want to ensure that their efforts and investments are as solid and safe as possible. With Samba, there is no vendor of a proprietary SMB stack that could be acquired by competitors to discontinue the product as seen by the acquisition of Likewise by EMC.

Benefit from experience
A long track record and veritable experience with SMB is important. Many companies and vendors want to integrate a free, mature, peer reviewed open source SMB stack. There is no need to keep reinventing wheel – using Samba allows to build on what has already been achieved.

Experience the advantages of a vibrant community
For a key component, companies can work with the vibrant Samba community that is innovative, agile and open. Diversity is an asset!

Comprehensive and independent technical support
Technical support for Samba is provided by a wide range of companies around the world. In addition to SerNet (Germany) with customers in Europe, the US and worldwide, there is also Catalyst from New Zealand with its customers in many countries around the world as well as many other supporters. SerNet offers 24/7 support and development services for more than 20 years to customers from startups to blue chips and many Fortune 500 companies among them.

SAMBA keeps up with Microsoft’s latest SMB development
Microsoft and the SAMBA team are working together in a long-term collaboration. Microsoft learned to embrace open standards and is increasingly committed to open source software and free software principles. Communities like the SAMBA team may be slower than companies - but their progress is free to the public, reliable and irreversible. Samba does not aim to be first and the fastest, but follows the idea of “opening windows to a wider world” in collaboration with Microsoft. Members of the Samba team are regular presenters at international conferences and attend interop events hosted by Microsoft several times a year.

SAMBA has no GUI - intentionally!
There is no GUI provided by the SAMBA team because you simply do not need one. After setting up SAMBA within a few steps, you're able to configure your Microsoft-compatible SMB AD controller and file & print server with a Windows-based management console. Also, vendors need a GUI that is tailored to their product.

Embedded SAMBA use is possible – if you want to
Samba can be tailored for embedded use. If you want to take the challenge and customize Samba for your use case, you can start working on it right away - or work with someone like SerNet to help you.

SAMBA preserves its history
Often we hear: “SAMBA has a lot of legacy code.” Of course it has! SAMBA is the best backward compatible SMB stack on the market and legacy support is a crucial asset in a Windows world with its highly diverse Windows versions being run by users and companies.

Dive into the broadest variety of supported platforms
SerNet's SAMBA+ offering is diverse and complete – just take a look at the Subscription Management Portal OPOSSO to see which platforms are supported.

Do you have more questions? Or would you like to talk to us about the use of Samba / SAMBA+? Then please feel free to contact us.