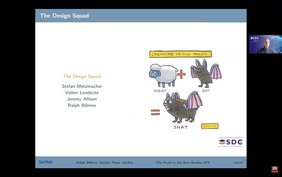 Recordings from the 2021 Storage Developer Conference (SDC)  are now online, including those from the SerNet Samba Team. Ralph Böhme talked about "The new Samba VFS" and Stefan Metzmacher presented an Status Update on "Samba Multi-Channel/io_uring".

"The new Samba VFS" video by Ralph Böhme is on YouTube: https://youtu.be/D9EZO3gkT9U, also available are the slides.

Abstract: Starting with version 4.14 Samba provides core infrastructure code that allows basing all access to the server's filesystem on file handles and not on paths. An example of this is using fstat() instead of stat(), or SMB_VFS_FSTAT() instead of SMB_VFS_STAT() in Samba parlance. Historically Samba's fileserver code had to deal a lot with processing path based SMB requests. While the SMB protocol itself has been streamlined to be purely handle based starting with SMB2, large parts of infrastructure code remains in place that will "degrade" handle based SMB2 requests to path based filesystem access. In order to fully leverage the handle based nature of the SMB2 protocol we came up with a straight forward way to convert this infrastructure code, so it can be converted to make use of a purely handle based VFS interface. The talk presents what we have achieved so far and what is left to do. It's intended audience is anyone working on the Samba fileserver code and anyone working on Samba VFS modules.

The "Samba Multi-Channel/io_uring Status Update" by Stefan Metzmacher is also on YouTube: https://youtu.be/fnA4imgBsUo, slides are available.

Abstract: Samba had experimental support for multi-channel for quite a while. SMB3 has a few concepts to replay requests safely. We now implement them completely (and in parts better than a Windows Server). The talk will explain how we implemented the missing features. With the increasing amount of network throughput, we'll reach a point where a data copies are too much for a single cpu core to handle. This talk gives an overview about how the io_uring infrastructure of the Linux kernel could be used in order to avoid copying data, as well as spreading the load between cpu cores. A prototype for this exists and shows excellent results.