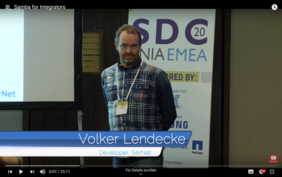 Volker Lendecke, SerNet co-founder and long-time Samba Team member, was once again a speaker at SDC EMEA. At this year’s conference (February 4, 2020 – Tel Aviv, Israel) he specifically addressed integrators who want to use Samba. The recording is available on YouTube: https://youtu.be/RHHsTfKmI_c (direct link).

Lendecke deals with these points in his lecture "Samba for integrators":