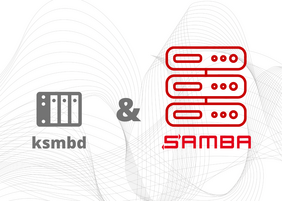 "ksmbd" is a new Linux kernel module which implements an SMB server. It's aimed at being low overhead, low footprint, performant fileserver covering many basic usecases, running on smaller devices with limited resources being the most apparent one: OpenWRT, the Linux distribution for embedded devices, adopted ksmbd already 18 months ago while ksmbd was still being developed.

ksmbd hit the public in November 2021 as part of the next Linux kernel version 5.15. It is not meant to replace the existing Samba fileserver "smbd", but rather be an extension and will integrate with Samba in the future. Samba's fileserver smbd is much broader in scope and supports various usecases and features that ksmbd does not:

While being a mostly feature complete SMB3 server, lacking only some advanced features like Durable Handles, Directory Leases and Multi-Channel, ksmbd currently can only make use of local users and passwords which precludes use in corporate environments where typically Active Directory or similar identity sources are used.

ksmbd claims performance improvements on a wide range of benchmarks: the graphs on this page show a doubling of performance on some tests. There was also the notion that an in-kernel server is likely an easier place to support SMB Direct, which uses RDMA to transfer data between systems.

Clearly, those numbers are impressive, but at the same time recent improvements in Samba's IO performance put this into perspective: by leveraging the new “io_uring” Linux API Samba is able to provide roughly 10x the throughput compared to ksmbd. 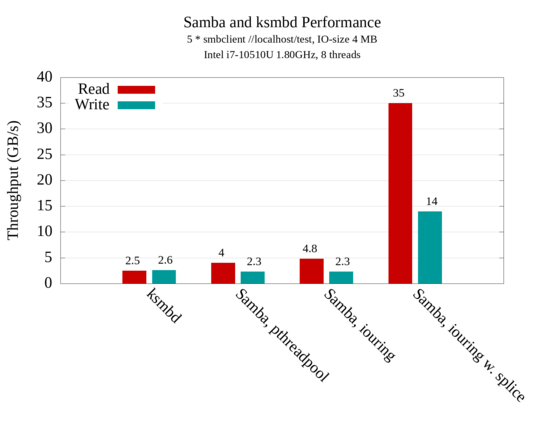 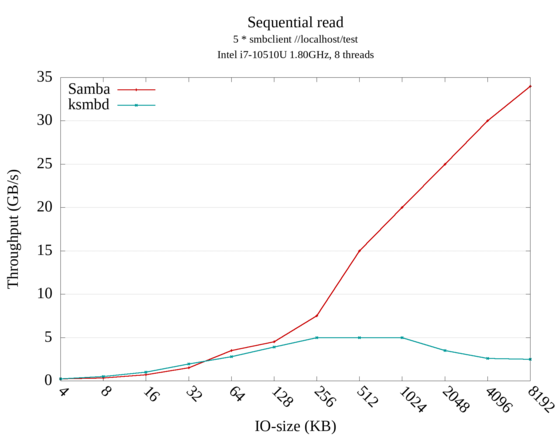 Time will tell whether it's better to reside in kernel-space like ksmbd or in user-space like Samba in order to squeeze the last bit of performance out of the available hardware.

How mature is ksmbd? Given that its was primarily developed by a Samsung engineer, it is likely that it is being used in Samsung products today. However, the November release is a .0 release with all caveats that come with it. Some of the details, including various security issues that were found and fixed quite late in the game, are described in an article over at LWN.

All in all, ksmbd is an impressive work and in order to facilitate and encourage collaboration, the main ksmbd developer Namjae Jeon has been invited to join the international Samba team. ksmbd already adds interesting capabilities to the mix and the SerNet Samba team is looking forward to working with and on ksmbd!