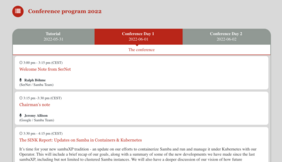 The program for the 21st sambaXP from May 31 to June 2, 2022 is set. The Orga Committee has published the schedule for the event on the conference page at https://sambaxp.org. Tickets, which are free of charge, are also available there. The agenda is filled with exciting talks for developers and users.  Special thanks go to this year's sponsors Google, Microsoft and SerNet.

sambaXP will again be held purely virtually in 2022 in order to allow as many people as possible worldwide to participate. For this reason - and to take into account the different time zones - the presentations will each start at 3 pm (CEST).

The kick-off on May 31 belongs again to the traditional samba workshop by Stefan Kania. His tutorial (3 pm to 9:30 pm CEST) will cover the topics "Setting up GPOs with Samba" and "Disaster recovery of an Active Directory" at once. The actual conference will be opened by Jeremy Allison, chairman of sambaXP, and Ralph Böhme (team leader of SerNet's Samba team) on June 1st from 3 pm.

Talks from the Samba-Team at SerNet (as they appear in the program):

Detailed abstracts on all presentations can be found at https://sambaxp.org.